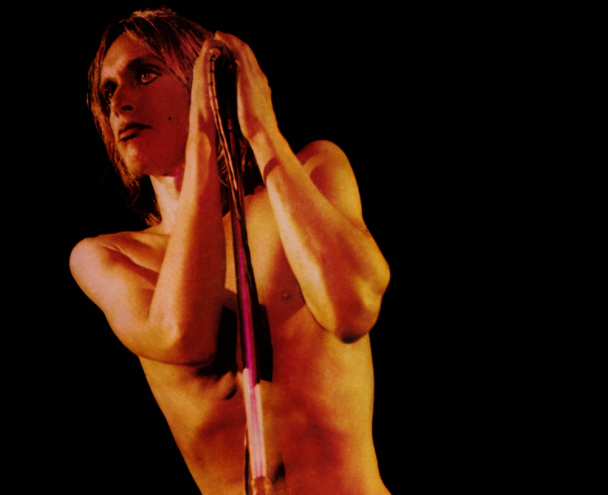 You might consider him as ‘the puppet from the Swift Cover advert.’ Or ‘the leather-skinned singer from the Trainspotting soundtrack’. But James Newell Osterberg, (aka: Iggy Pop), put out arguably one of the world’s most influential albums back in 1973. The album favoured by acts ranging from Manchester’s moodiest Steven Patrick Morrissey, to Gnarls Barkley’s Ceelo Green, placed the unknown drummer from Michigan into the rankings of rock eminence. A prime innovator of punk music and culture – four years prior to the scene’s explosion.

Producing an album that still manages to sound fresh and current forty years after its release: fusing elements of Jazz and rock to form a style that would later take the world by storm, contained eight tracks written by Iggy Pop and James Williamson. But after the truncated success rate of their two previous long player efforts, the band had actually already gone their separate ways by the time that ‘Raw Power’ was released.

‘Raw Power’ really does have it all, as far as rock is concerned; from the soaring guitar solos of opener ‘Search and Destroy’ and ‘Your Pretty Face Is Going To Hell’, to the slowed down blues inspired ‘I Need Somebody’ and masterpiece – ‘Gimme Danger’. Although they remain the album’s least energetic additions, they are most certainly the most gripping and audibly attractive. Intertwining with the album’s hard-hitters such as the frenetic ‘Shake Appeal’, becoming a staple to Iggy Pop astonishing live shows; inviting fans to invade the stage and dance alongside the awe-inspiring musician. All the while, combining jazz rhythms played with distorted guitars, wrestling with the feral vocal performances from the man himself. Exploring lyrical themes of lust and addiction, elements that he explored further through 1977’s ‘The Idiot’.

But above all, the reason that ‘Raw Power’ should be regarded as, at least, one of the greatest punk albums of all time, is the influence it has provided. Without it, punk may have never even happened. While each year an assortment of classic album contenders are released; but as far as punk goes, none have ever held the timeless quality of Iggy & The Stooges’ ‘Raw Power’. An album that shall remain just as fresh, and replenishing in another forty years time.

One thought on “Iggy & The Stooges ‘Raw Power’: The Greatest Punk Album Of All Time?”