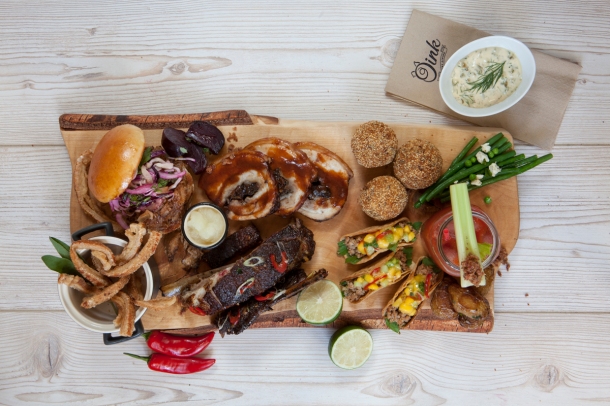 As soon as the news spread of a new pop-up restaurant that serves only Pork, I knew that I was in love. Situated directly opposite a Subway ‘restaurant’ that substitutes the Bacon in it’s B.L.T for revolting strips of Turkey, it’s a brave move to open a restaurant of this type. Upon entering the weekend revamp of The Café From Crisis on Commercial Street, just metres from Spitalfields Market, the interior is everything that you’d expect from a restaurant with an E1 postcode. (Even the newly opened branch of Pret A Manger at the other end of Brick Lane is inhumanely trendy). Raw bricks adorn the walls as well as Pork related quotes printed onto canvases (“Porkchops and bacon, my two favourite animals.” – Homer Simpson, is a personal favourite), illuminated by enchanting fairy lights that twinkle beneath the sound system and its constant loop of 21stCentury Folk-pop recordings from the likes of Ben Howard and The Lumineers. There’s only so many times that one can listen to Mumford & Sons’ ‘I Will Wait’ before venturing into a psychotic breakdown.

As for the food, as already mentioned, everything featured across the set menu features an element of Pork, apart from the dessert. However, the pudding does still taste a little Piggy, given the amount we’ve already eaten. But we’ll come to that later. Priced at £25 per person, the menu offers three courses and a welcome Cocktail, while other drinks are sold separately, and the menu that matches Ciders to each dish is well worth taking advantage of, priced at £5 each. To begin proceedings we’re provided with a Bloody Mary Cocktail that’s served in a Jam Jar (naturally) and is infused with Bacon Salt. Already on the cusp of being over-seasoned, be sure to avoid the mistake of salty Celery stick garnish as a stirrer. For starters, there’s a sharing platter of Korean Spiced Tacos that are pleasant enough, Pig Cheek and Black Pudding Nuggets, which taste sensational if not a little dry, and curls of crackling that are crisp and light, yet again over-seasoned. There’s no lack of skill in the kitchen at Oink, just a few minor errors that have big effects on each respective dish.

For the mains, we’ve three choices: ‘Buns of Squeal’ (Pulled Pork Shoulder served on a Brioche Bun), ‘Nice Rack’ (Carribean spiced Ribs), and ‘The Hogfather’ (Porchetta stuffed with Sage and Prunes). A huge fan of Pulled Pork, my Girlfriend opts for the ‘Buns of Squeal’, while the ‘Hogfather’ is irresistible to myself. Again, both dishes are good, yet slightly let down, by minuscule quibbles. The flavour of the tender Pulled Pork is delicious, albeit too weak to be memorable, while the Bun and Pickled Slaw are delicious. Again with the Porchetta, the roasted Sage and Prune stuffing is marvellous, with all three flavours evocative of a family Christmas, however I’d love the flavours that compliment each other so well to be a little bolder. The dessert Pear and Rhubarb Crumble is a welcome finale, topped with crunchy Hazelnuts and light Vanilla Custard. At first, the catastrophic thought of School Dinners does spring to mind, but when the dish arrives its taste is actually very appetising.

On paper, Oink is one of East London’s finest restaurants. There’s such strong potential that’s actually within arm’s reach, just so long as they can iron out the disappointingly trivial creases in the kitchen.

The original article can be found online at tle-online.com.