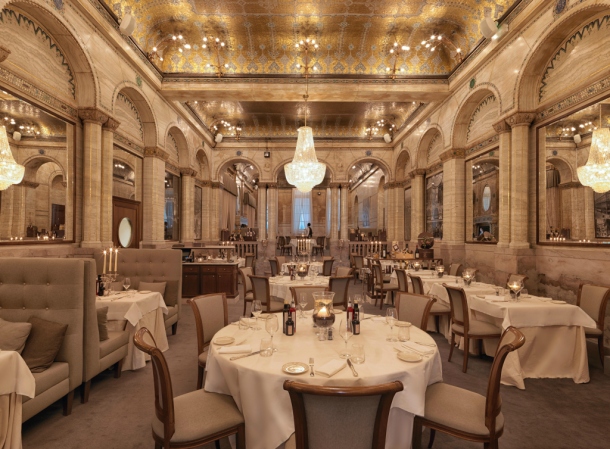 Located mere feet away from Piccadilly Circus, the restaurant space at The Criterion has become one of the city’s most historically significant since being built in the late 1800s by architect Thomas Verity. With its cavernous ceilings tiled with intricate mosaics, a bar area that stretches down into the main dining space and a focus on real gold leaf and marble furnishings, the restaurant space at The Criterion is truly breathtaking: offering an air of elegance and sophistication that’s rarely found within this century. And having lent its surroundings to a strong of various restaurateurs over the past 133 years, the space is now run by Savini – a high end Milanese restaurant, having branched out into London with their first international venture.

While the interiors are genuinely some of London’s most picturesque, this kind of setting within such a vast, historic, and centrally located premises comes with an extortionate cost to rent and to run. The price of which is reflected very much so within the menu, beginning with what’s perhaps the most expensive starter I’ve ever eaten. Priced at £25.50 three £2 coin-sized scallops were perfectly cooked – caramelised heavily on the top yet springy inside, though an odd combination of bitter charred broccoli and yellow pepper cream worked in accordance to completely override the sweet delicate taste of scallop. It was a mere smattering of salty anchovies that provided the only reminder of the dish’s origins within the sea. A millefeuille of foie gras (£19) was surprisingly less expensive, though simple the dish’s rich, fatty liver offered the sort of joy that’s experienced by a fat child on tour of a chocolate factory, with some balsamic vinegar and candied lemon to cut through some of the richness.

Next, a superbly creamy Jerusalem artichoke risotto (£19.50) was delicious, although the sheer quantity in relation to its accompaniments meant that the risotto would become a little tiresome once the dish’s other components had been devoured. An unexpectedly large breast of pigeon was cooked to perfection, though the giant’s fist helping of parmesan managed to overpower the dish, served table-side before I’d even the chance to defy. Traditionally a Milanese peasant’s dish, veal ossobuco focuses on shin of veal, a less expensive cut of the luxurious meat. And although tender enough to be eaten without any teeth, the small cut from the lower part of the shin meant that very little of the tasty bone marrow was on offer to scoop out and savour. What’s more, although a good level of cooking skill had been demonstrated with both the shin and the accompanying saffron risotto – the £34 price tag seemed excessive in such an instance.

Quite fortunately my dessert was a resounding success; a refreshing mousse of mango (£9.50) was served with a wafer thin tuille (not a waffle, as is stated within the menu) and intriguing pumpkin compote and chestnuts – each of which lent a comforting reminder of winter. Alas, the less said about my companion’s pear tarte tatin (£8.50), the better. Most of the soggy undercooked pastry ended up returning to the kitchen uneaten, not that anybody seemed to care. An appeal from an interior design and historical point of view is omnipotent with The Criterion, yet there’s also an underlying air of pomposity, set by a mixture of diners and occasionally argumentative waiting staff, that does affect the restaurant’s general atmosphere nonetheless. While Savini’s London outpost does have its moments of greatness; there are, unfortunately, a number of other Italian restaurants within the local area that offer a better overall experience, especially when considering a price point of approximately £100 per head.