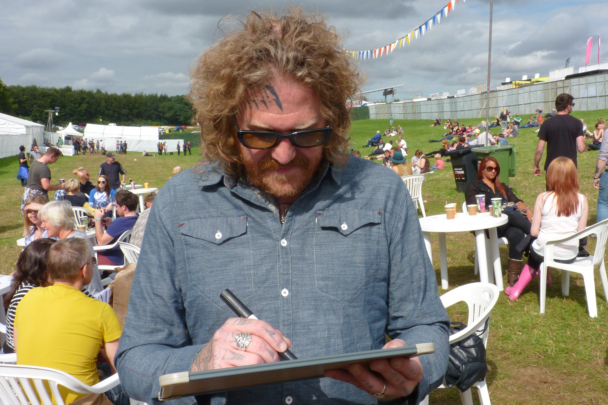 “I’m not trying to be an ass hole, I am an ass hole” declares Brent Hinds as we approached him for an impromptu whiteboard interview, between beers, at this year’s Leeds Festival. So after getting Mastodon’s lead axe wielding maniac to scribble some things on our infamous whiteboards we learnt a lot about Hinds’ personality and his desire to be playing at the festival, or even in a band at all, but who can blame him, on the last show of the band’s extensive UK tour?

Here’s what we learnt from him…

Who would be your dream festival headliner? Dead or Alive.

What’s your craziest ever festival experience?

What’s your favourite thing about being in Mastodon?

What can we expect from your performance at Leeds festival?

Then finally, do you have a message for your fans?

Soon followed by “I have too much to say and too little time to say it”. So there you have it, life in one of the USA’s fastest rising metal bands probably isn’t quite as exciting as you would expect.