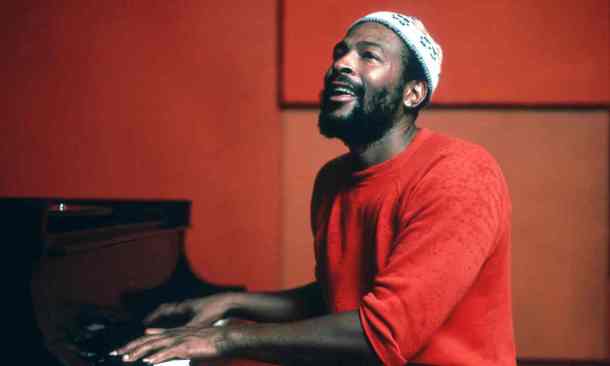 Marvin Pentz Gay Jr’s earliest experiences of singing in public came when he was three, performing as a part of his father’s church choir in Washington DC. With a passion for music that continued into his teenage years sand saw him performing with various groups in DC and then Chicago, he came to the attention of Berry Gordy Jr after moving to Detroit in 1960, and was signed to Tamla, one of Gordy’s Motown imprints. Gaye initially showed no particular desire to become an R&B performer, however, and instead strove to succeed as a jazz musician, perhaps because of his agonising shyness – a trait that was often evident throughout early live performances. He made his first album in 1961, but had to wait until the end of 1962 for his first hit. Hitch Hike was released as a dance song – Gaye recorded the drums and piano himself – showcasing the singer’s soulful vocal range. The song’s composition also clearly influenced other classic songs such as the Velvet Underground’s There She Goes Again, as well as the Smiths’ There is a Light That Never Goes Out.

After having hits with duets with Mary Wells and Kim Weston, Gaye was teamed with Tammi Terrell, who was hired especially for the job, in 1967. At first, both artists recorded their vocal contributions separately but soon they formed a close friendship. They were given a song by husband-and-wife songwriting team Nickolas Ashford and Valerie Simpson, and Ain’t No Mountain High Enough became a huge crossover hit – a romantic love song you could dance to. Between 1967 and 1969, Gaye and Terrell went on to record three albums together, and released a host of successful singles, most of which were also written by Ashford and Simpson. Tragically, the duo’s partnership was cut short when Terrell died of a brain tumour a month short of her 25th birthday in 1970. Though their relationship was purely platonic, Terrell’s impact on Gaye’s life and career was immeasurable, and her death led to him to depression and drug abuse – neither of which he ever truly overcame, almost causing him to quit music. Gaye’s reaction to Terrell’s death would also profoundly influence his future work, particularly his introspective 1971 masterpiece: What’s Going On.

3. I Heard It Through The Grapevine

During 1968, Motown worked on a new album with Gaye, after a couple of years in which he had released only singles. Though Gladys Knight & the Pips’ 1967 version of I Heard it Through the Grapevine had become Motown’s biggest selling single so far ,Gaye’s rendition from those sessions provided his commercial breakthrough, giving him his first US No 1. Written by Norman Whitfield and Barrett Strong, the song’s narrative featured themes of betrayal and emotional suffering, built upon a phrase associated with civil war slaves’ form of telegraph: the human grapevine. Gaye’s paranoid interpretation of the track is sensational, far more ominous than Knight’s, with its slower tempo and brooding vocals. The song’s release as a single was initially rejected by Gordy, yet it overtook the Pips’ version to become Motown’s new biggest seller, only succeeded two years later by the Jackson 5’s I’ll Be There. The single was so successful, in fact, that Gaye’s 1968 album In the Groove was later reissued and retitled I Heard It Through The Grapevine.

What’s Going On, from 1971, was the first album Gaye produced himself, and it proved to be a stark contrast to his back catalogue, as he unveiled a social conscience. The album’s title track – initially shunned by Gordy, who claimed it was the worst song he’d ever heard – was conceived by Motown songwriter Al Cleveland, who had been inspired by Four Tops bassist Renaldo “Obie” Benson witnessing police brutality in Berkeley, California. The rest of the Tops weren’t interested, but Benson convinced Gaye to take it on. Gaye adopted the song’s initial concept and reworked it, lyrically and melodically, adding his own personal experiences into the mix. The Vietnam war experiences of Gaye’s brother Frankie played a vital role in inspiring the album’s overall concept – the perspective of a veteran returning home to America, only to be greeted by a plague of suffering and injustice.

The second single from What’s Going On, Mercy, Mercy Me (The Ecology), was written by Gaye, who also played piano and mellotron on the song. Gaye was mourning mankind’s mistreatment of the world, but also expanding his vision to include the chemical weapons used by the US military in Vietnam to destroy the vegetation used by the Vietcong as cover and the rice paddies they relied on for food. Since its original release, Mercy, Mercy Me has become one of Gaye’s most famous recordings, and to mark the 20th anniversary of its release, in 1991, Motown released a new video for the song which featured guest appearances from labelmates such as Smokey Robinson, Stevie Wonder and Diana Ross.

While the title track set the blueprint for What’s Going On, it’s the album closer that’s most gripping. Built upon a bluesy atmospheric groove, Inner City Blues is the product of a collaboration between Gaye and Motown songwriter James Nyx Jr, who between them conjured a timeless composition that works as a tale of frustration about the state of America’s inner cities, ending with a reprise that harks back to the album’s opening. Instead of being indignant, Gaye’s delivery of the track is both reflective and cynical – frankly discussing issues such as poverty and taxation (“Money, we make it / Before we see it, you take it”), crime, lack of opportunity, and “trigger-happy policing”.

What’s Going On was Gaye’s first top 10 album in the US, resulting in Motown offering him a $1m contract, making him the highest-earning black recording artist yet, which also granted him a high degree of artistic control. The first fruit of the deal was Gaye’s soundtrack for the film Trouble Man, but he began to suffer from writer’s block once the time to work on a new studio album came. So he turned to former Motown labelmate Ed Townsend for help. Townsend had written Let’s Get It On as a religious song after treatment for alcoholism, but Gaye reworked it as a love anthem, the cornerstone of the sexually charged album it gave its name to, which became another huge hit and cemented Gaye’s sex-symbol status. The lyrics were inspired by Janis Hunter – who would later become Gaye’s wife and mother to two of his children – whom he met during the sessions for the album. What’s most prominent about Let’s Get It On, however, is the extraordinarily smooth vocal delivery drenched with both soul and passion, supported by Gaye’s own multi-tracked backing vocals that add an extra dimension.

Soon after the release of Let’s Get It On, Motown Records released Diana & Marvin– an album of duets with Motown’s First Lady. For all the creative control granted by his new contract, Gaye later admitted he felt pushed into recording the album by the label. Gaye’s next solo effort, I Want You, arrived in summer 1976 and showcased his return to his comfort zone of sexually charged R&B, with a set of songs that proved controversial on release for their raw intensity (Gaye had difficulties with sexuality, because of the censorious attitudes of his abusive father, who provided a tormented view on the subject through extreme Christian sect teachings). Again inspired by his affair with Janis Hunter, the album’s title track features spiritual overtones that hold the carnality in check, while Latin-inspired percussion joins Gaye’s multi-layered vocals, the track’s defining feature, to create a languid atmosphere that provides a fine introduction and insight into Gaye’s most sensual body of work.

Soon after the release of I Want You, Gaye embarked on his first European tour for more than 10 years. The London show, at the Palladium, was recorded for a live album, which also featured this one studio track. Got To Give It Up is the live album’s only studio recording, a response to Motown pressing him to take advantage of the new popularity of disco. Rather than create a simple pop song, Gaye instead recorded a 12-minute disco parody track that combines a casual party atmosphere with a solid funk composition and falsetto lead vocals that showcase his astonishing vocal range. The four-minute single version of the song became a huge hit. It cut the final half of the song, which spirals into a loose funk jam, topped with a guitar solo and a repetitive chant that directly inspired Michael Jackson’s Don’t Stop ’Til You Get Enough. The song later became the subject of a landmark court case, when Robin Thicke and Pharrell Williams were ruled to have taken elements from it for their worldwide hit Blurred Lines.

The late 70s and early 80s saw Gaye immersed in personal, emotional and financial problems, and at odds with Motown. He finally left the label in 1982, signing to Columbia for what turned out to be his final album. Midnight Love was trailed by the single Sexual Healing, a song that combined funk and reggae influences with gospel-streaked vocals with a frank expression sexual desire. It became a huge worldwide hit. However, Gaye’s cocaine addiction had worsened, his two failed marriages haunted him, and he continued to mourn Tammi Terrell. After a period spent living in Ostend, Belgium, he moved back to his parents’ home in Los Angeles, but his relationship with his father flared up again. On 1 April 1984, Gaye intervened in an argument between his parents; at 12.38pm his father shot him twice. Marvin Gaye was pronounced dead at 1.01pm.

The original article can be found online at theguardian.com.